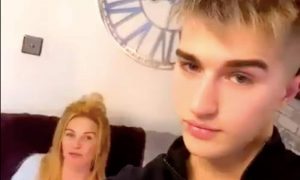 Your mother stumbling on your explicit OnlyFans might be the stuff of nightmares for most, but one user found his mum is a massive fan of his page in the biggest plot twist in recorded human history.

Yes, the biggest. No, we’re not exaggerating.

UK-based OnlyFans star Cameron Cook, 19, otherwise known as “Jack the Lad”, took to TikTok to put trolls in their place after a user questioned whether his mum is “proud” of his “accountant” job – a reference to a viral trend of OnlyFans stars pretending to be accountants rather than explaining what they really do.

In a video, Cook, whose OnlyFans has nearly 48,000 likes, goes to ask his mother about what she thinks of his job as she’s sat on the couch in the living room.

The pair then gush over what Cook’s earnings have gotten them – from driving lessons to a large flatscreen television.

“And I have your support?” Cook adds.

Considering the world is a pit of pain and suffering at the moment, Twitter users quickly praised Cook’s mum for restoring their faith in humanity, long thought to be a write-off.

Cook’s mother certainly isn’t the first parent to find her child’s OnlyFans account only to bring the pompoms out for them.

Orlando, Florida-based OnlyFans user Chris was stunned when his mum sent a slew of frantic text messages to him after her co-worker, Jamie, outed him for having an account.

Sending him a text with his full name – a sure-fire way for any parent to cause their child to shudder with fear – she interrogated Chris about why he was sharing explicit photographs of himself online.

After Chris clarified why he uses the platform and asked why she doesn’t phone him to talk about it instead, she hit back: “You can go ahead and call me if you’d like and try to explain it, but I honestly don’t care.

“I was just pretending to care because Ms Jamie was in my office still.