Drag Race UK returns in September – and with it, an array of made-up faces that often transcend the limits of ‘make-up’ altogether (watch out for Charity Kase).

But in the run-up to a new series, it’s easy to forget we’ll soon be just as acquainted with the stars out of drag as in. In fact, we’d wager a bet we often see more of the former!

And while there’s always debate over who’s ‘trade of the season’, this time, it’s seriously impossible to call. They’re all gorgeous…

From the show’s first cis woman competitor to the contestant who favours cosmetics in and out of character, meet the class of Drag Race UK series three, both on and off-duty… 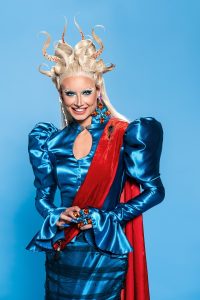 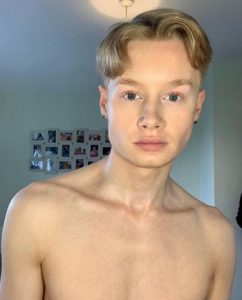 “Scarlett is a beautiful woman, with movie-star looks. She’s a glamorous diva and when she talks, she’s a proper mouthy, cheeky cockney. She’s like Danny Dyer in drag!

“Representation really does matter to me. I have come from nothing. I grew up on a council estate and I feel so proud to have landed myself in one of the biggest shows in the UK right now. I want people to know you can make a banquet out of scraps. I am doing this for the Isle of Dogs!” 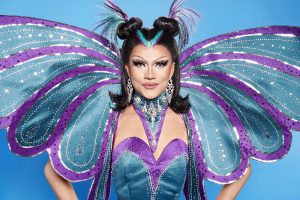 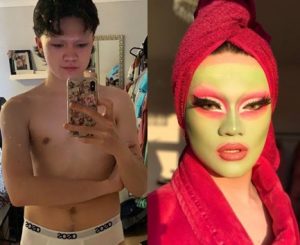 “I love to sing live, and I love musical theatre. Some people do drag to be looked at, like a model. That’s fine, but for me, I want to have a connection with an audience member.

“I want them to get to know me and I want to get to know them, because that is when people really fall in love with you and for me that’s the best part.” 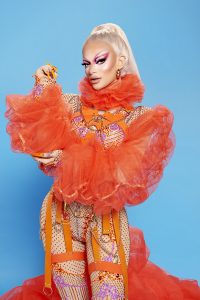 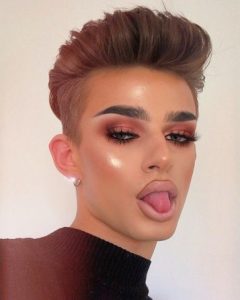 “I’ve been doing drag professionally for almost two years since I was 17. I started dabbling with makeup when I was about 13. It was all trial and error really. At the time, boys wearing make-up was becoming a big thing. I practiced so much, and perfected my art, and drag just felt like the natural next step. “My first time in drag was so overwhelming because it was the first time, I’d been around other queens, but I just felt like I’d fallen into something so magical. I knew that I needed to keep doing drag for the rest of my life!” 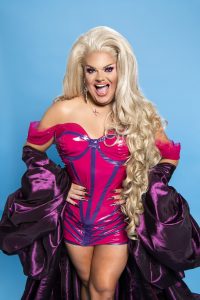 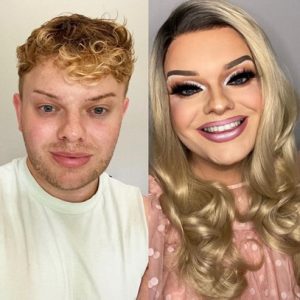 “I’d say sewing is my weakness. I can get by but I’m not the kind of gal who can construct a couture garment from scratch. And if they make me do a make-over I’m out. I can do my own face but not other people!

“I tried to do it on my friend, and it was horrendous. But this is the Olympics of Drag. This is a once-in-a-lifetime opportunity. I don’t want to waste a single second feeling nervous.” 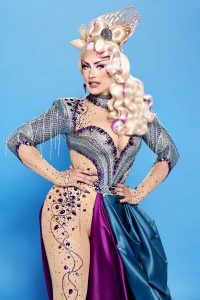 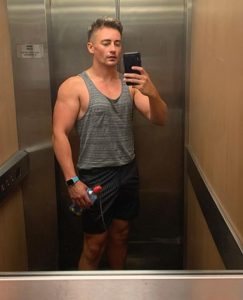 “I like to be larger than life. My drag is the feminine side of me, which as a male actor I’ve never been allowed to show, so it’s two fingers up to everyone who has ever told me I must look like a leading man. Now, I am both the lead man and the lead woman!

“As a trained actor and dancer, with a long West End career behind me, I am a very experienced performer. I trained at Bird College and left in 2008. My first job was backing dancing on X Factor for Eoghan Quigg and I also did backing dancing for Olly Murs on X Factor too.” 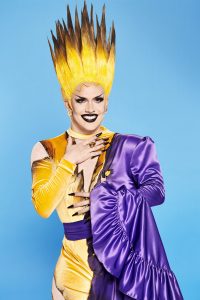 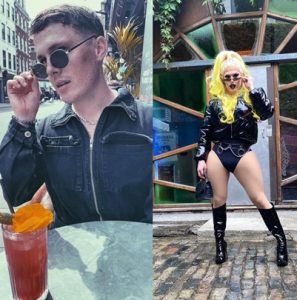 “Elektra’s look is camp meets glam with a bit of low-fashion thrown in for good measure. Think Pamela Anderson on the school run!

“I am inspired by northern warrior-women like Bet Lynch and Jane McDonald – hence my obsession with leopard print! But also by strong, glamorous ladies, like Miley Cyrus, Kris Jenner and Madonna!” 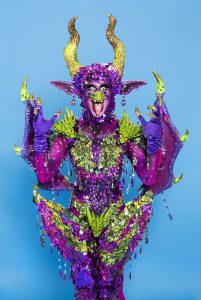 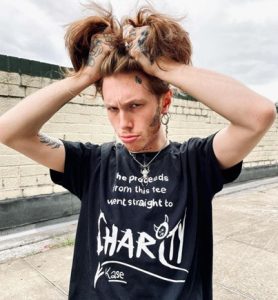 “[I’ve] doing drag for five years. A few years ago, I gave myself a ‘365 days of drag’ challenge, which really kick-started my drag career. It was my way of developing my make-up skills and trying to get as good as possible. By the end of it, I was getting bookings all over the world, so I carried on and here we are today!

“I’ve performed in Tokyo, New York, Boston, Paris, Amsterdam, Milan and Bologna and most of Europe! I just love what I do and I wouldn’t wish to spend my time doing anything else. It’s my life.” 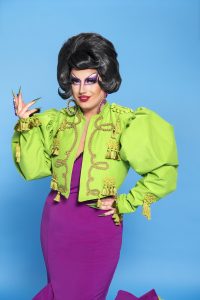 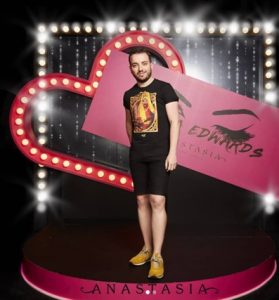 I think I’m a funny queen. I love making people laugh. Also, I’m very emotional, and I love connecting with people through my art. I’m also a graphic designer and illustrator so I’m very creative.

“In fact, as a fan of Drag Race, I’ve created lots of fan art, and now it’s hard to believe I’m on the show! It’s just wonderful!” 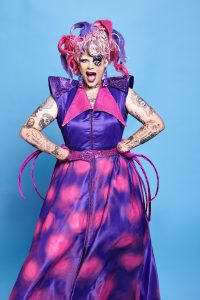 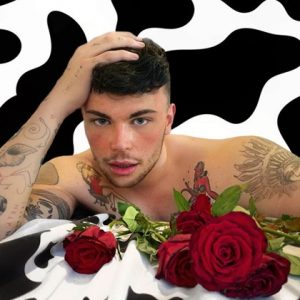 “Not to brag or anything, but I do have quite a wide skill set. I’ve got the vocals, I got the dance moves, I got the comedy… so I really think I’m a bit of a threat!

“My mum and my nan are the big inspirations for me. A lot of my drag persona is based on my grandma, she’s an absolute legend. She’s really wacky with a really kind heart. She raised me, and so she is partly responsible for the craziness that is me, Anubis.” 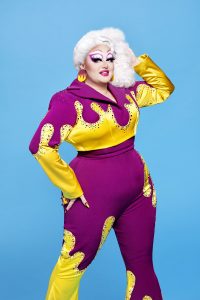 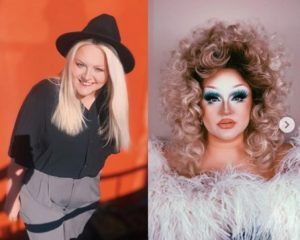 “I am a Pompey girl originally but I moved to Cardiff, which was where I fully established my drag career. So Victoria is very much a Cardiff girl! 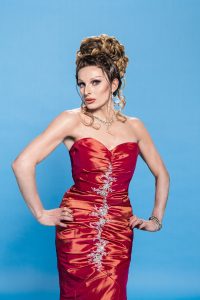 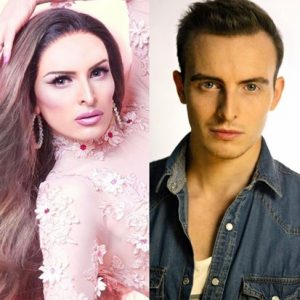 “My sister, Veronica, is the inspiration for me and my outfits, and she’s had to fend off all of her work colleagues, asking for my autograph and video messages.

“Veronica’s had a bit of second-hand fame too, which she loves. My whole family has been so supportive, I couldn’t ask for more of them. 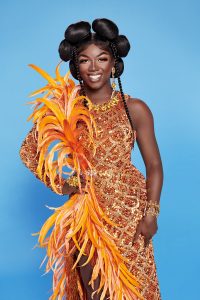 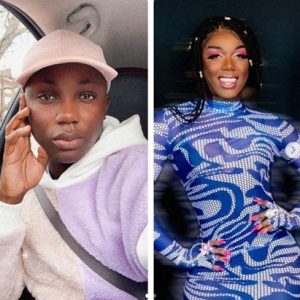 “I am competitive. I believe if you put your mind to it, and you put the blood, sweat, and tears, the hard work and dedication behind it, you can be somebody! But that doesn’t mean you have to take other people down to get there.

“I’m nice and I’m real. I always work hard. If I fail, I try and try again, and if I put my mind to it, I can do anything. I’ve worked really hard to be here, and my eye is on the prize…”