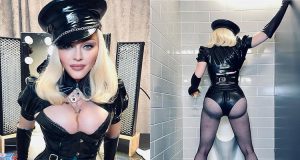 Madonna caused a stir at last night’s MTV VMAs – as she has many times in years past – by showing up for her surprise appearance in an BDSM-inspired look.

The awards ceremony, which took place at Barclays Centre in Brooklyn, New York City, was hosted by ‘You Right’ singer Doja Cat, who also performed.

Emerging on stage to ‘Vogue’, Madonna introduced the show – as well as a performance by Kid Laroi and Justin Bieber – after arriving in a trench coat… only to reveal her skimpier ensemble underneath.

Sharing pictures of herself in the outfit on Instagram last night, Madonna repeated in a caption, except this time without the royal ‘we’: “And they said I wouldn’t last…”

The 63-year-old previously emerged from a 17-foot wedding cake at the 1984 VMAs to perform ‘Like a Virgin’. She also made headlines for kissing Britney Spears and Christina Aguilera on stage at the 2003 VMAs while performing ‘Hollywood’.