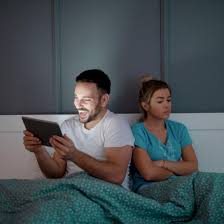 Have you ever felt confused about some strange behaviour of a man? It is like they are hiding some secret behind it.

This is not going to continue for much longer because we have found out the truth and is going to share it with you.

01 – He suddenly disappears for months, and then he returns as if nothing happened.

What happened: He left some message or called you to check up on you after a few months of silence.

What you think it means: He had a sudden business trip and had to solve some arisen issues, so he had no time to check up on me. Or maybe some bad guys kidnapped him, blackmailed him and he was just released this morning. Anyway, I am still the one he thinks about when he has time. He did try every minute to talk to me.

What it means: Well, he just wants to check if you are still alive and always available for him, or he is still a special person for you.

02 – He starts a conversation, but he doesn’t support it.

What happened: He texts or talks to you first, but then leaves you there in the middle of the conversation.

What you think it means: He might have another sudden work that needs to be done soon. Maybe his phone broke or out of battery. He was abducted by aliens. Or he was on a street and someone stole his phone. But he most definitely wanted to talk to me.

What it means: He wanted to check up on you and remind you of his existence. And he did not allow you to forget the past.

What happened: He never had an idea to have an in-person meeting with you after a long time you have been in an online conversation.

What you think it means: He may be too shy to meet me in person. He is scared of me saying “no”. He is worried that I will not like his appearance. He is too nervous to meet such a wonderful and confident girl like me. Give him some time, then he will ask me on a date later.

What it means: He just needs someone to talk with. He does not mean to meet you in real life even if he has time.

04 – He uses you in his elaborate schemes.

What happened: You had a wonderful time together, but then he suddenly disappeared.

What you think it means: He did not want to push our relationship too fast. He wanted to take it slow. Or he was testing my patience. He wanted to have time to make sure that he had feelings for me. He had problems at work, he wanted to focus on his career. He had no time for love right now. But tomorrow, or the day after tomorrow, or some other day, everything will be good between us.

What it means: He does not see you as a constant partner for him. He is not interested in you.

05 – He wants to be a competitor for other guys who are interested in you.

What happened: He only cares about you when he knows some other guys are interested in you.

What you think it means: He wants to keep me for himself only. He is jealous. He has finally realized that he loves me so much and does not want other men to take me from him. He does not want to lose me.

What it means: He needs constant competition. A relationship without it is just not interesting to him.

06 – He is looking for a “special” relationship…but not love.

What happened: He keeps flirting with you but just wants to stay friends, no more.

What you think it means: He needs more time to make sure about my feeling for him because he is afraid of me saying “no”. He can’t resist my charms. He wants to take it slow and become good friends first before deciding to go further.

What it means: Flirting with you is fun for him. He knows you have a feeling for him and he just wants to play with it. He does not want to go further with you. Maybe he has a girlfriend already or he will be bored soon.

What happened: You meet occasionally after work.

What you think it means: He has many works that need to be done. After that, he can spend time with me. It’s so nice. Sometimes, he even spends the night even though he could go home. Well, I get it. He is so exhausted that he just can’t go home.

What it means: It’s very convenient for him to have a constant s*x partner. But soon, he will have a relationship and a real girlfriend, and his job will suddenly not be as important as it is right now. And you will just ask yourself, “WHY?!”

08 – He doesn’t introduce you to his family or friends.

What happened: He rarely talks about family or friends to you. He never introduces you to his friends and family, even you are kind of a couple. You spend all the important holidays separately.

What it means: He does not want his family and friends to think you are his girlfriend. You don’t matter to him as much as his friends and family do. It’s because he doesn’t see you that way.

What happened: You communicate online constantly or even see each other often. But it is because you know the same people and there is nothing romantic or special about it.

What you think it means: He loves me, but the wounds he got in his previous relationship have not healed yet, so he doesn’t want to push it. I will be his best friend, and then he’ll understand that he loves me.

What it means: You are a great friend, and it’s nice being with you. But you are not and will not be his girlfriend. You are nothing more than just a friend.

10 – He doesn’t want to discuss your future together.

What happened: He will ignore and try to find some excuses to not talk about the future with you when you try to talk about it. He becomes very mysterious and gets very angry. And sometimes, he simply says, “I did not think about it yet.”

What you think it means: He wants to propose to me so that it’s a surprise. However, he has some financial troubles, and he doesn’t want me to have them on my shoulders. When he fixes those problems, we will get married.